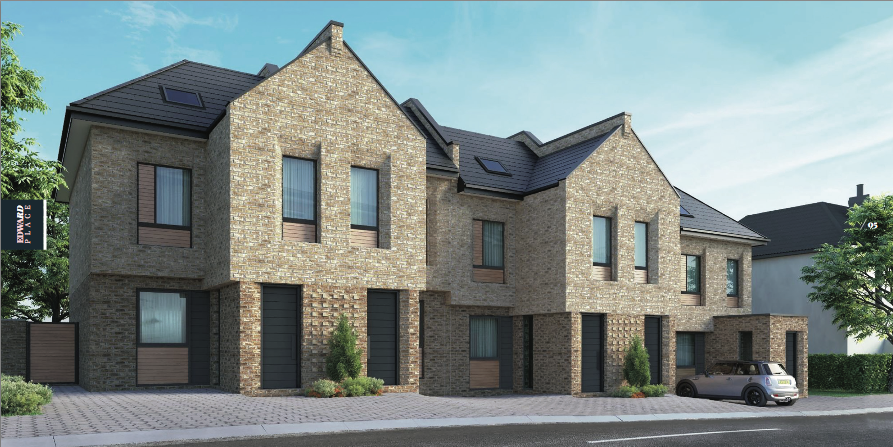 Titled: 5 NEW BUILD TOWNHOUSES IN BARNET NORTH LONDON. Demolition of a bungalow on a large plot of land and the building of 5 townhouses close to the New Barnet Station.

Edward place, Edwards road, Barnet EN4. Built to the highest specification, arranged over three floors boasting an open plan living space and three large bedrooms. Downstairs the ground floor consists of a hall, WC and a lounge kitchen diner. Upstairs the two floors have three bedrooms, a master with fitted wardrobes and luxurious en-suite, plus two further double bedrooms, one with dressing area and a family bathroom. Each house has its own private parking space to front and garden to the rear.

These superb new homes are about a mile south of the historic Battle of Barnet in 1471. Edward IV secured the throne that day so we are delighted to have built these homes on a road named after him. High Barnet Station is only a short walk away making these a great location for city workers wanting that valuable garden space that much of central London doesn’t have. The big city is only 20 minutes by train on The Northern Line. The location is perfectly placed for a variety of restaurants, cafés and shops, including a Sainsbury’s within walking distance. There are excellent restaurants at nearby Cockfosters, Whetstone High Street, High Barnet and Totteridge.

As you can see from our website we build a lot of new homes in North London. The reason being, with boroughs such as Barnet, Harringey  and Islington theres a huge amount of culture and entertainment available. Whether you want to be close to The City Of London , or have great access to, South London, East London or West London, our new homes in North London are not to be missed.

Thank you for reading 5 NEW BUILD TOWNHOUSES IN BARNET NORTH LONDON. This development has now been completed and all houses sold.

The foundations of the Meg Group have been around for four generations. We have established ourselves as a successful property development company in the South East. Be first to see our up to date news and insights into our upcoming projects.